← more from
Crammed Discs
Get fresh music recommendations delivered to your inbox every Friday. 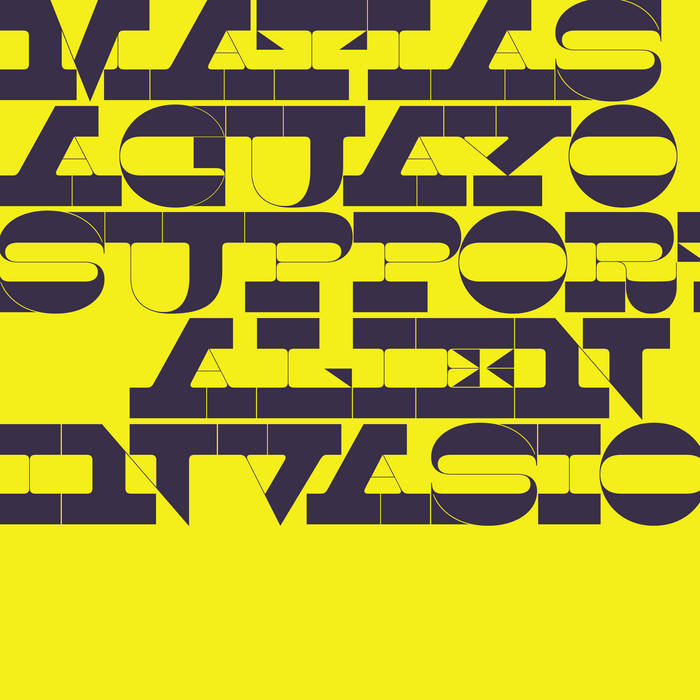 The ever-surprising and adventurous Matias Aguayo takes another step into unknown territories with this new solo album (his first in six years).

The most immediately striking aspect of Support Alien Invasion is the dual nature of the music: the tracks overflow with festive dance action via hypermodern grooves, while exuding an impression of quasi-abstract sonic architecture.

The danceable dimension is stunningly original, as Matias has been striving to create heavy, sound system-friendly beats which incorporate non-Eurocentric, non-4/4 rhythm programming. The result often sounds like some kind of irresistible, futuristic Maloya or carnival music, which induces new ways of dancing (as already witnessed by Matias while testing tracks during his DJ sets), and might open new roads by bypassing some of the rules and references set by the official dance music narrative.

At the same time, when approached in a more intimate setting (headphones, living room, inner sanctum), the album turns out to provide a unique listening experience: one can easily get lost in its buzzing soundscapes, huge spaces, clinking tones, and other sonic inventions which bring Support Alien Invasion strangely close to some elegant, conceptual electroacoustic piece of work.

Also noteworthy is the fact that, although Matias Aguayo has been exploring unconventional ways of using his voice in in his previous recordings, this is the first of his albums on which he chose not use this trademark feature.

So what's with the title ?... Rather than referring to aliens from outer space, it's a plea to welcome human aliens (the different, the foreign, the immigrant), a hope that letting them 'invade' us might set us free, free from isolation, alienation, exclusion. Support Alien Invasion  reflects this on many levels, for instance by the use of rhythms far beyond the dominant structures of the northern hemisphere.

Support Alien Invasion comes out on May 24. Forward-thinking, eclectic music lovers will be happy to learn that (leading boundary-breaking label) Crammed Discs and (Matias and Avril Ceballos’ internationalist electronic music imprint) Cómeme have exceptionally joined forces to release this album.

Matias Aguayo in a nutshell: born in Chile and raised in Germany, he's created a varied body of genre-defying work since the early 00s, including several albums with legendary Cologne-based electronic music label Kompakt. A much in-demand DJ, he's constantly been performing all around the world, in clubs, festival stages and on the street. His own imprint, Cómeme, has become a reference for free-spirited dance music lovers, featuring and nurturing above all Latin American producers and DJs, but also artists from other corners of the world, Bucharest, Johannesburg, Helsinki and more. Matias Aguayo has always been an original, iconoclastic artist: starting out "the man who helped popularize and expand minimal [techno]" (Pitchfork), he's gradually been using his voice as a key element, in his DJ sets and on certain albums. In 2016 he went on to form The Desdemonas, a post-electronic rock band which he fronts as the lead singer.

By contrast, today, when the herd animal in Europe is the only one who attains and distributes honours, when “equality of the rights” all too easily can get turned around into equality of wrongs – what I mean is into a common war against everything rare, strange…
Nietzsche, Beyond Good and Evil

1. S.A.I. represents another step into unknown territories, along the mysterious paths Matias Aguayo consistently chooses to tread. This music seems to have been conceived in the high Baroque realm of a parallel world: folds, ruffles, angles, the inside, the outside, the nature and the soul. What is exuberantly masquerading as music for the millennial rave turns out to be the ultimate statement of a common thread in Aguayo’s work. Nomads and monads, the dance of pluralism!

2. Matias’ call to support the invasion of the alien (the different, the foreign, the other, the strange, the rare, the immigrant) is meant as a joyful political statement, a passionate negation of exclusion, lockdown and isolation - a sonic effort against the dreadful reality of people drowning in the seas and dying at the borders, against the dreadful sight of the impoverishment of souls under the rule of capital, personal profit, calculation and fear.

3. Joyful science is meant to be resurrected here, by abandoning rigid grammar and form. How remarkable: a musician effecting a crucial development with a light-footed move, delivering a comprehensive statement and raising to a next level in his own work without integrating his “most precious asset”, his “unique characteristic”: there is no singing on this record, no human voice, no crooning subject – no Matías? But it’s all only Matías! We hear buzzing soundscapes, scraps, clinking glasses, colossal halls, endless spaces, sacred machines, knobs and buttons! We move to heavily-danceable and vividly complex beats – folding spaces, question-and-answer games from ancestral instruments, an arabesque, futurist Maloya, a dragon dance, a trap beat – triplets and polyrhythm all over the place, half tempo, double tempo, small sound, big sound – what a celebration!

Join Aguayo on this trip, leaving the corporate public space to embrace the meaningful and the sensorial, the trance and the focus…