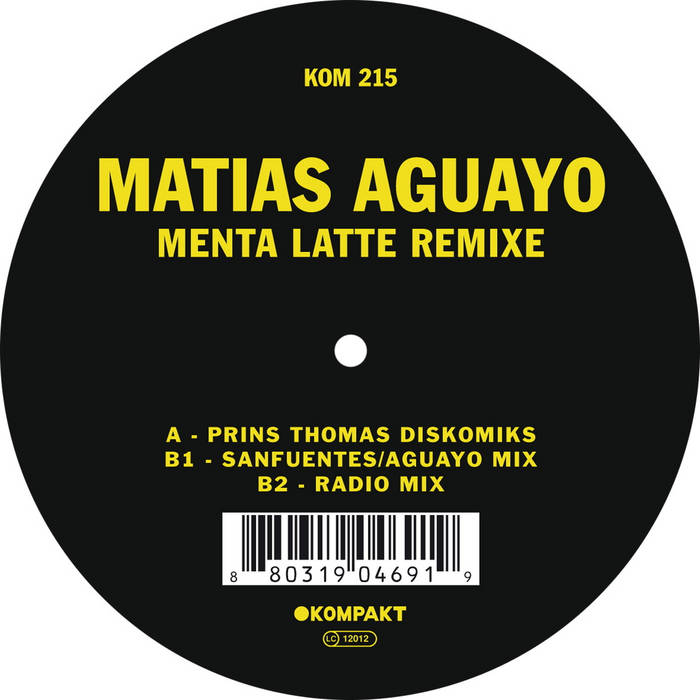 Matias Aguayo returns to Kompakt after a phenomenally successful year following the release of his critically acclaimed full length “Ay Ay Ay” on Kompakt (KOMCD76/2LP - KOM205) - a groundbreaking cocktail of latin fuelled songs recorded almost entirely with his vocals. This summer saw him hit the best of Europe's festival circuit and more with his live band and this fall promises to be just as busy for Aguayo and crew. If that wasn't enough, together with his S. American crew he has the Cómeme imprint that continues to gain popularity thanks to it's consistent booty laced output. So crowd favorite “Menta Latte” gets the remix treatment. From the kazoo riddled beginning it's impossible not to keep the chorus rolling through your head for days - we think of it as our café lineup anthem here at Kompakt HQ! Who else could be more perfect to do his own rendition than our maestro of the northern light of disco's forbidden dance than Prins Thomas. We certainly don't need to introduce all this man has accomplished and he delivers - keeping the organic sensibility of the original by making it RAW. Acid flirts with bongos and wonky bass in a diatribe of immense magnitude. The results are tremendous - a gallivanting steam roller. Aguayo's Chilean production partner (and band mate) Vicente Sanfuentes may be known as Original Hamster and as an award winning studio producer but when he teams up with Aguayo it turns into pure madness. Cowbells coral in Aguayo's vocals together with a Moroder-esque groove and the acid beat flitters on as with Prins Thomas masterpiece. We live in the throws of their sweat as certainly the club is going to be graced with plenty of when this tune dives on the dancefloor. Finally, those that may have missed the original version are treated to a special rumped up radio mix of the original…summer lives on